With our coverage of  the National Hockey League’s 1967 summer meetings at an end, in the coming days we’ll recap most of the hockey news the took place over the rest of the summer, leading up to our daily coverage beginning September 1. Today we look at the hockey news from June of 1967:

The Philadelphia Flyers started things off on June 11 by naming National Hockey League veteran Vic Stasiuk as the new coach of the Quebec Aces of the American Hockey League.. The Flyers had purchased the Aces franchise just before the Expansion Draft and earlier in the week they dismissed incumbent coach Phil Watson.
Stasiuk, 37, had been coach of the Jersey Devils of the Eastern Hockey League. He gained fame in the NHL as a member of the Boston Bruins famed Uke Line in the 1950s with mates Johnny Bucyk and Bronco Horvath. Vic is at left in the photo.
In his 12-year NHL career, Stasiuk scored 138 goals and added 254 assists.
This is Stasiuk’s fourth coaching post in the past four years. After two years leading the AHL Pittsburgh Hornets, he moved to Memphis of the CPHL before taking over in Jersey last season.
Watson says he will take legal action against the Flyers organization over his dismissal.

Red Kelly and his wife Andra are house-hunting in Los Angeles. The deal on their Toronto home closes in mid-August. Red is already hard at work with Kings general manager Larry Regan on plans for their September training camp, which will be held in Guelph, Ontario.

Former Canadiens’ defenceman Jean-Guy Talbot is looking forward to joining the Minnesota North Stars. Talbot has not played hockey anywhere other than in Quebec and his family has only lived in the French-speaking province. Talbot will enrol his family in English classes before heading to Minnesota in September. 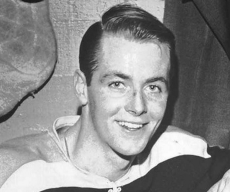 Joe Crozier, who for the past few years was a Toronto Maple Leafs employee while performing the duties of general manager and coach of the their American Hockey League farm team Rochester Americans, has become part owner of the Amerks, while retaining his coach and GM duties. 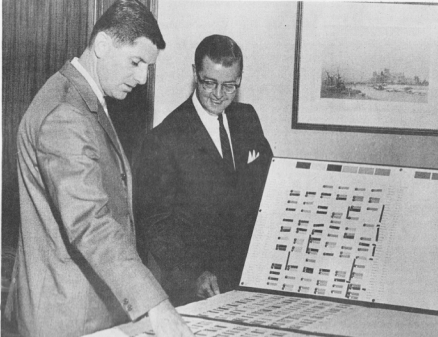 Brian O’Neill, director of administration for the National Hockey League, is tasked with producing the 1967-68 NHL schedule. He’s having quite a time satisfying everyone. He says there have been quite a few requests for changes from the original draft. Most upset club was the St. Louis Blues, who were spending most of the first month of the season on the road. That issue is being dealt with.

O’Neill is seen here on the right with Gil Smith of the Hockey News.

Philadelphia Flyers owner William Putnam says he’s having a tough time getting used to the fact he is now an accepted member of the NHL Board of Governors. Putnam says that for the past year and a half the new teams were considered outsiders and weren’t allowed in to confidential league meetings.
At their first governors meeting after the draft, or more importantly, after they had all produced their $2 million expansion fee cheques, the governors were asked to take their seats. Putnam began to leave the room.
Toronto’s Stafford Smythe asked Putnam where he was going and he smiled and said “I thought my seat was out in the hall!”

California Seals have been aggressively working to try and trade for the rights to retired Toronto defenceman Carl Brewer. Brewer’s former defence partner Bob Baun was California’s first choice in the Expansion Draft.
Toronto GM Punch Imlach told Seals owner Barry Van Gerbig that he owed Brewer nothing and that he wants to make him sit out as long as the NHL rules say he must.

Brewer had asked to be reinstated as an amateur so that he could play for Canada’s national hockey team. NHL rules state he must sit out until the fall of 1968.

On another front with the Seals, general manager Rudy Pilous was fired by Van Gerbig. This comes just six weeks after Pilous was given a vote of confidence by the Seals owner.
Van Gerbig says the dismissal comes after a difference of opinion over “operational matters.” Coach Bert Olmstead will now add the role of general manager to his coaching duties.

Ullman to Have Shoulder Surgery

Detroit Red Wings centre Norm Ullman is going to have surgery on his right shoulder to repair damage from an injury he received last November. He will have the surgery at University Hospital in Ann Arbor, Michigan.

Terry Sawchuk has been named the winner of the J. P Bickell Memorial Trophy. Trophy is given to a Toronto Maple Leaf player as chosen by the club’s Board of Directors for outstanding contributions to the team. Sawchuk put on a spectacular goaltending performance in the 1967 playoffs, and without his heroics, Toronto would not have won the Stanley Cup.

St. Louis Blues have signed Roger Picard, brother of expansion draft choice Noel. Roger has been a leading scorer in the Canadian Senior Amateur Hockey League in Quebec and is known to be even tougher than his hard-rock defenceman brother.

Bobby Hull has teamed up with Lester F. Stanford to organize a new company – Bobby Hull Enterprises. The new company will handle all of Hull’s business ventures and will have offices in Toronto and New York City.

Minnesota North Stars general manager Wren Blair has found a coach for the fledgling NHL team by looking in the mirror. Blair named himself coach for the 1967-68 season.
Blair went a step further and designated coach of their Memphis farm team, John Muckler, as his eventual successor behind the North Stars’ bench.