At 32 years of age, 12 years into a hockey career that has seen him play only 27 National Hockey League games, Bill McCreary thinks he can make the big time once and for all this season. Wally Cross of the St. Louis Post-Dispatch sat down with McCreary to discuss the veteran forward’s chances with the Blues this season.

The native of Sundridge, Ontario began his hockey journey with the Guelph Biltmore Mad Hatters in the Ontario Hockey Association Junior A Series in 1951. His first junior season was a success as the club won the Memorial Cup. That team was led by future NHL stars Andy Bathgate, Harry Howell, Dean Prentice, Lou Fontinato, Ron Murphy and Ron Stewart. Two years later in the 1953-54 season he had a two-game trial with the parent New York Rangers before being sent back to Guelph. The following year was his last in the junior ranks, and he also got into eight games with New York. 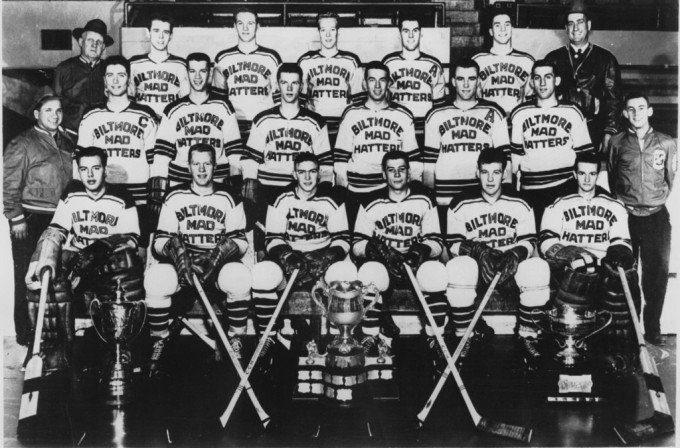 Bill bounced around the American and Western hockey leagues before being claimed by the Detroit Red Wings from the Rangers during the intra-league draft in June of 1956. He played his only three games with Detroit in 1956-57, but he did manage to net his first NHL goal.

Deal to Canadiens a Break

Detroit traded him to the AHL Springfield Indians in May of 1958. After four years playing for Eddie Shore, he was dealt to the Montreal Canadiens. The deal with Montreal was arranged by Shore after Bill had quit Springfield after a dispute over money.

The trade to Montreal was a big break for him. In his first season with the Habs organization, McCreary got into 14 games with the big team, scoring five points on two goals and three assists. He hasn’t been back to the NHL since.

This summer, Blues general manager Lynn Patrick, on a strong recommendation from assistant Scotty Bowman, arranged to purchase McCreary’s rights from Montreal. Bowman knew McCreary from their time in the Montreal organization and liked Bill’s professional demeanour and his “hockey smarts.”

The St. Louis – Montreal deal was actually a promise by the Blues to the Canadiens that during the Expansion Draft, if the opportunity arose, they would draft forward Claude Larose from the Habs and trade him back to Montreal after the draft. McCreary was basically payment for that promise.

McCreary thinks NHL expansion is a huge opportunity for players like himself and he sees no reason why he can’t stick with St. Louis:

“First of all, I’m at least 25 per cent better than the last time I saw the National Hockey League. I wouldn’t even consider the idea if I didn’t know so many fellows who made the NHL after they were 30, or suddenly came into their own at that age. Allan Stanley, for example, Johnny Bower too.

“The opportunity also is greater today. There are 12 major league teams now, where there were only six a year ago. Suddenly they need an additional 120 players. and the competition won’t be quite as rough because the talent is spread a little thinner – for the time being at least.

“I was figuring the other day that I’ve averaged 22 1/2 goals a year in my 12 professional seasons. Isn’t it logical to think I’ve got a chance?”

A testament to McCreary’s hockey “smarts” and the esteem in which he is held by hockey men is the fact that two years ago he was professional hockey’s youngest coach with Houston of the Central Professional Hockey League. He took over for Bowman, who had been forced to step aside because of illness.

McCreary is so confident he will make the Blues that he moved his family to St. Louis in August. Since then he’s been working in the Blues ticket office. He believes that this will be his last stop as a professional player:

“I don’t think I could accept being sent to the minors again. I’ve had enough moving around. If I can’t stick with the Blues, I’d seriously have to consider retiring.

“I’m confident I can make the Blues but I’ve prepared for the worst by saving enough dough in 12 years to get me over any rough spots.”