With the usual dark Friday night in the National Hockey League, today we have a few tidbits to report on. We’ll have an update on the condition of Toronto star Frank Mahovlich, where the blame game has already begun. We also have confirmation on the age of ageless goalkeeper Johnny Bower of the Maple Leafs. And, there were a few Junior A games on which to report.

Stafford Smythe, the outspoken president of the Toronto Maple Leafs has suggested that the newly-formed National Hockey League Players Association is to blame for the collapse of his superstar forward Frank Mahovlich.

“The only reason I can give for this is that Mahovlich has been under fierce pressure to join the union. He has been hounded by Eagleson and some of the players who are in the association.

“Before the game with Montreal I was told the guys had been bugging him to join the union, but he didn’t want to join. He seemed worried about this and the effect it might have on the team.

“There is no other reason I can suggest for his sudden depression. He has been playing pretty good hockey all season and was happy with his contract.”

Of course, it didn’t take long for Eagleson to refute Smythe’s claims:

“There has been absolutely no pressure exerted by members of the association or myself for Frank Mahovlich to join us. It is quite obvious the pressure has come from somewhere else.

“In every other club except Toronto we have either 90 or 100 per cent membership. This has been achieved without exerting influence on any player.”

“Mahovlich is not the only member of the Toronto Maple Leafs who has politely avoided the association. Four or five others also declined to join, most of them as prominent as he his. If pressure to enlist was the reason Mahovlich broke down, why haven’t the four or five others similarly been hounded to hospital?”

Beddoes went on to comment that when Mahovlich was hospitalized for a similar ailment during the 1964-65 season, there was no players association to bother him at that time.

Toronto Star columnist Milt Dunnell suggested that derision from Toronto fans may have contributed to the Big M’s depression.

Toronto club physician Dr. Hugh Smythe had some good news. He says that Mahovlich should recover more quickly than expected.

“Right now it looks like Frank’s chances this time are more hopeful than the last one.”

Johnny Bower, the venerable goalkeeper of the Toronto Maple Leafs, has finally ended speculation about just how many years he has accumulated on the planet. Bower confirmed yesterday that he is 43 years of age, and will be 44 next week on November 8. But he still isn’t above joking about it:

And then with the next breath he muttered “Take it easy on me, Lord.”

Bower let the secret slip during a discussion about the new contract he had received from the Leafs this week after he had blanked the Montreal Canadiens 5-0 Wednesday evening. Bower met with Imlach yesterday to finalize the details of his new deal after Imlach told him after Wednesday’s game that his contract was being torn up.

There are 24 weeks remaining in the hockey season.

The Niagara Falls Flyers of the Ontario Hockey Association Junior A series are still the loop’s only undefeated, untied team after eight league games. The Flyers edged the Toronto Marlboros 6-5 last night in the Honeymoon City.

The only other OHA Junior A game saw the London Nationals cruise to an 8-3 win over the hapless Ottawa 67s. 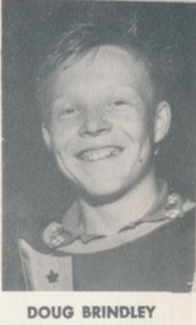 The game at Niagara Falls was a wide-open affair, with the Flyers holding a 47-35 edge in shots on goal. Doug Brindley led the Flyers attack with a pair of goals. Singles came off the sticks of Dan Makey, Ross Webley, Karl Haggerty and Garry Swain.

Tom Martin was the most prolific of the Marlies, netting three goals. Frank Hamill and Ric Jordan also counted for Toronto.

Ottawa got two goals from Jean Potvin with Guy Smith adding the other.