Today we have the details on the four National Hockey League games played last night, along with some American League action and the usual Quick Hits.

The Boston Bruins sit alone atop the National Hockey League Eastern Division standings today. Boston attained that lofty perch thanks to a 7-5 win over the Detroit Red Wings last night at Boston Garden.

Johnny McKenzie was the scoring hero for the Bruins. For the first time in his NHL career, McKenzie scored three goals in a game to lead the Bruins attack. As McKenzie completed his hat trick in the game’s 59th minute, the 13,909 fans on hand chanted “We’re number one!”

Tommy Williams scored the game-winning goal at 16:09 of the third, snapping a 5-5 tie. Fred Stanfield, Eddie Shack and Bobby Orr also scored for the Bruins.

Paul  Henderson connected twice for the Red Wings. Norm Ullman, Dean Prentice and Floyd Smith had the others.

McKenzie was overjoyed at finally scoring three times in an NHL game:

“My first hat trick ever!. I had been getting a lot of assists before, but my shooting wasn’t just right. Tonight, when the puck came to me, it did go right. The best game our line has played this season.

“The Chief (Johnny Bucyk) set me up on the first one. It went right beween Gardner’s legs.

“I just took a swipe at the second goal. The puck came out to me but it was bouncing. I took a slap shot and the puck just hit the top part of my stick and flipped up into the net.

“I couldn’t believe the third goal. Bucyk made a strong move at the Detroit goal and I just had to poke home the loose puck.”

Williams, the only American-born player in the NHL, was no less enthusiastic about his game-winner:

“The greatest…the biggest goal I’ve ever made in this league. The puck just came out on my stick from Skip (Krake) and I let it go. That was all I could do.”

The game was a wide-open affair with very little in the way of defence from either side. It was the fifth win in the past six games for Boston. 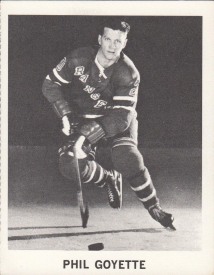 Goyette scored his goal from a bad angle on a backhand shot that may have changed direction. Bob Nevin had stickhandled past a couple of Blues players and laid a great pass onto Goyette’s stick.

It was the only one of 37 Ranger shots to get past Blues goalie Seth Martin, who put forth a superlative effort between the pipes for St. Louis.

Gilles Villemure made 37 saves for Rangers to register his first NHL shutout. It was a gritty performance for the New York netminder who made his first start of the season just this past Thursday.

The game was hardly a classic, as far as action goes. The Blues followed coach Scotty Bowman’s game plan to near perfection. They checked as closely as possible and allowed the New Yorkers absolutely no room to get moving. The usually raucous Garden crowd had no trouble expressing their displeasure at the lack of excitement the game offered.

Best skater for the Blues on the night was defenceman Al Arbour. He put in another fearless exhibition of shot-blocking, proving once again he’s the best in the business at that.

The loss keeps the Blues winless in the past seven games.

The Minnesota North Stars went into this weekend’s home-and-home series with the Chicago Black Hawks committed to execute what they believed to be a solid game plan. They followed their plan to perfection, but it still wasn’t good enough to beat the Hawks in either game.

North Stars coach Wren Blair believed that if the Stars could stop Bobby Hull they had a chance at winning both of the games And that is exactly what they did. Hull was limited to only six shots all weekend, and he didn’t score a goal. But the North Stars still couldn’t win.  You see, the Black Hawks aren’t a one-line team.

Last night’s hero was Mohns, who potted both Chicago goals. After an extremely slow start for both his team and the line, it looks like the Scooters are finally rounding into form. Mohns certainly thinks so:

“It was just a matter of time. Now we’re going like I know we can. Before we were more concerned about our defensive play.”

Minnesota right winger Bill Collins was Hull’s constant companion on the ice this weekend. His checking effort kept the Golden Jet off the scoreboard.

Hull managed only four shots on goal last night, but his first one put Minnesota goalie Gary Bauman out of the game. At 6:05 of the opening frame, he struck Bauman on the shoulder with a blazing slap shot, and the rookie retired for the night right then and there.

Cesare Maniago came off the Minnesota bench and was outstanding in relief. He earned a couple of ovations from the Chicago crowd, who were appreciative of his efforts.

Dave Balon scored the only Minnesota goal with about four minutes to play. He shoved a loose puck into the Chicago goal after Hawks’ keeper Denis DeJordy had made two successive saves.

Philadlephia Flyers exploded for their biggest offensive outburst of the season last night at the Spectrum in Philadelphia. The Flyers drubbed the visiting Los Angeles Kings by a 7-2 score.

The Flyers chased Kings starting goalie Wayne Rutledge, who was lifted in the second period by coach Red Kelly after Philadelphia had built a 5-0 lead. Veteran Terry Sawchuk took over in the Los Angeles goal.

Real Lemieux and Terry Gray scored goals 25 seconds apart for the Kings in the third period, long after the issue was no longer in doubt.

Bernie Parent made 25 saves in a tidy performance for the Flyers. He now has won four straight games.