Some interesting results from five National Hockey League games last night, including a match in which Toronto’s Frank Mahovlich celebrated his birthday in grand style.

Frank Mahovlich celebrated his 30th birthday in grand style last night at Maple Leaf Gardens. The Big M scored both goals for the Maple Leafs as they edged the Detroit Red Wings 2-1.

Despite the low score, it was a wide-open, fast-skating game with an abundance of scoring chances. Toronto outshot Detroit 43-36, but goalies Bruce Gamble for the Leafs and the Wings’ Roy Edwards staged an entertaining netminding clinic.

Edwards was particularly effective over the first two periods when he faced 34 Toronto shots. He showed no signs of worry over his job after the news came out yesterday that Roger Crozier will be making a comeback to the team after “retiring” on November 6.

Mahovlich opened the scoring at 8:17 of the first period when he tipped a Dave Keon slap shot past Edwards, who had no chance on the play.

Dean Prentice of the Wings tied things up about two minutes later when he was sent in alone on Gamble by new Detroit defenceman Kent Douglas. Douglas had been acquired by the Red Wings in a trade with Oakland less than 24 hours earlier and arrived at Maple Leaf Gardens in late afternoon. 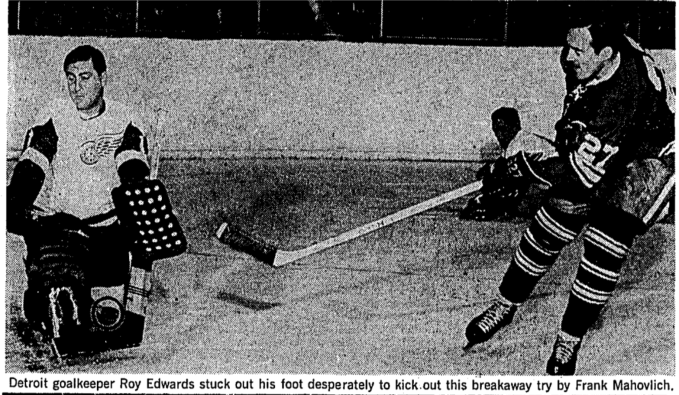 The winning goal by Mahovlich, at 10:14 of the middle stanza, was a thing of beauty. the tall, graceful left winger, who was literally everywhere on the ice all night, intercepted a pass by Detroit rearguard Gary Bergman. The Big M streaked into the Red Wings zone and went past defenceman Howie Young like he was standing still, which he was. Frank than skated in all alone on Edwards, lured him out of the net and then lifted a backhander over his outstretched leg into the goal.

The unassisted marker was the 13th of the year for Mahovlich, and the 290th of his career.

Mahovlich spoke to reporters after the game and talked about that second goal and his birthday:

“He beat me on my forehand so I went to my backhand,” was his explanation of his move on the winning goal. Edwards had stoned him on a similar play in the first period.

Asked about what gifts he might have received on his birthday he responded:

“When I was in the hospital, I did a lot of skipping. The kids gave me a skipping rope. I got a book about wine and some stationery.”

Douglas was asked how he felt about the trade to Detroit but said he was too tired to even think about the deal:

“I’m beat. I got a helicopter at five to seven this morning in Oakland to take me to Frisco and I didn’t get to the hotel here until 5:15.

“I’m going to miss the golf, though. My house was adjacent to the 14th hole out there.”

Douglas did have high praise for Mahovlich. Early in the game he delivered a stiff body check on the Toronto superstar that seemed to have no effect:

“I tagged him good. Last year that would have discouraged him. This time he just shook it off and came back faster and stronger. He’s playing the best two-way hockey of the past half dozen years and is making full use of his tremendous talent for a change.

“His winning goal was a masterpiece.”

“Young did just wat the Big M wanted. He went for the puck and not the man. That’s a fatal mistake defending against a player with the moves of Mahovlich. I was amazed that Frank got so much power into his shot. He was away over on his backhand after faking Edwards out of position. Not many players have enough strength to backhand a puck into the goal from that position.”

Maple Leafs coach Punch Imlach, never one to lavish praise on his big winger, actually cracked a smile when asked about his birthday boy:

“I’m beginning to like those birthdays. Mike Walton scored a big one on his 23rd birthday in Montreal last week. Now the Big M comes up with two on his 30th birthday tonight.

With all this praise for Mahovlich, those trade rumours that were circulating during his time in the hospital should be put to rest. It would be difficult for any team to offer the kind of player(s) that could tempt the Leafs to surrender the Big M the way he’s playing now.

A goal by defenceman J.C. Tremblay with only 41 seconds left on the clock gave the Montreal Canadiens a narrow 4-3 victory over the Penguins before a crowd of 5,580 at Civic Arena in Pittsburgh.

Montreal captain Jean Beliveau made the big play on the winning goal. He stole the puck from Pittsburgh defenceman Noel Price, a former Hab, and fed a pass to Tremblay, who had joined the rush. Tremblay beat Penguins goalie Les Binkley with a partially-screened shot from about 40 feet.

Pittsburgh grabbed the early lead on a couple of goals by veterans Keith McCreary and Earl Ingarfield. Montreal roared back with three straight goals in the second period to take a 3-2 lead before the Penguins knotted the score at 3-3.

Montreal goals in the middle frame were scored by Beliveau, Ralph Backstrom and Dick Duff but Pittsburgh’s Ab McDonald scored only 38 seconds after Duff’s goal at the eleven-minute mark to make things even.

The third period was a tense, close-checking affair with only a total of 10 shots on goal by both teams (6-4 Montreal). There were virtually no scoring chances of consequence by either team until Tremblay’s winning goal in the final minute.

Veteran Camille Henry scored his first two goals after being recalled from Buffalo of the American Hockey League to help the New York Rangers to a 3-3 tie with the Black Hawks in Chicago.

Rangers came from behind twice to even the score, and thus ended a nine-game home-ice winning streak for Chicago. Rangers are now unbeaten in six games, with three wins and three ties.

Henry was playing on a line with centre Jean Ratelle, who scored the other New York goal, and right-winger Rod Gilbert only because of a serious injury to left wing Vic Hadfield. He was carried off the ice on a stretcher in the first period after crashing into the boards. It is suspected that he may have sustained either a broken or dislocated shoulder.

The teams traded goals in the first period, with Dennis Hull giving Chicago a 1-0 lead early and Henry evening the score late in the first.

The second stanza saw Chicago go up 3-1 on goals by Stan Mikita and Kenny Wharram but Ratelle narrowed the scored to 3-2 late in the period.

Henry tied the scored with just less than 10 minutes remaining in the game when he snapped a 15-foot wrist shot past Chicago goalie Denis DeJordy.

It was a sweet moment for Henry, who played with the Rangers for 10 and a half years before being traded to Chicago in 1965. He was re-acquired by New York this past August for defenceman Paul Shmyr and had been in Buffalo until his recent recall.

Right winger Wayne Connelly was the difference for the Minnesota North Stars as they downed the Philadelphia Flyers 7-4 at the Met Centre in Bloomington, Minnesota. He is the first Minnesota player to score three times in a game.

Connelly scored twice in the first and once in the final period. Other North Stars goal-getters were Andre Boudrias, Pete Goegan and Ray Cullen. Brit Selby had a pair of goals for the Flyers, with Leon Rochefort and Jimmy Johnson adding singles.

Minnesota fired 39 shots at Flyers goalie Doug Favell to saddle the visitors with their first loss in 11 games. Minnesota is now unbeaten in their last four starts. Favell wasn’t happy with his performance:

“Everything has been going just great – just great – until tonight. I let in three goals I should have had. We scored four goals. We could’ve won the game. There’s no excuse for a game like that.

“We had a lot of injuries though, and we’ll do better here next week.”

Flyers other goalie Bernie Parent had words of encouragement for Favell in the dressing room after the game:

The injuries to which Favell referred were to captain Lou Angotti and winger Leon Rochefort. Angotti was taken to Methodist Hospital for examination of a leg injury while Rochefort injured his left thigh. It’s not known how long Angotti might be out, but Rochefort will probably miss at least one game.

Already in sick bay for the Flyers are Ed Van Impe (cheek), Bill Sutherland (chest), Pat Hannigan (ankle) and Garry Peters (eye). They can ill-afford two more players to go down for any period of time.

The trade the Oakland Seals completed with the Detroit Red Wings Tuesday paid immediate dividends last night for the Seals when they hosted the St. Louis Blues.

Centre Ted Hampson, one of the main cogs in the deal that saw the Seals ship out defenceman Kent Douglas, scored the tying goal at 11:12 of the third period to lift Oakland into a 2-2 tie with the visiting Blues before only 2,810 fans. And the goal was set up by defenceman Bert Marshall, the other key player the Seals picked up in the deal.

Hampson scored when Marshall’s shot from the blue line squirted loose in the goal crease after St.. Louis goalie Glenn Hall made a great save but was unable to corral the rebound.

Wally Boyer had given the Seals a 1-0 first-period lead with his fourth goal of the year. The Blues came back with a pair of second-period scores by Tim Ecclestone and Don McKenney to lead 2-1 going to the third.

Blues coach Scotty Bowman was not at all disappointed with the tie:

“You play for a tie on the road. Don’t forget, we picked up a point on everyone in our division except Minnesota and Oakland.

“We all agreed the second period was the best we have played all year.

“Tim Ecclestone looked good at centre. This was his first game in the middle and we had to go with him since we had four men out. I was also pleased with the work of our new guy, Craig Cameron, up from Kansas City.”