There were three National Hockey League games played last night, including the eighth straight win for the Montreal Canadiens. We also have some player movement news and more helmet talk.

Montreal Canadiens continued streaking towards the top of the National Hockey League Eastern Division standings with their eighth straight win last night. The Habs, looking nothing like the last-place team that they were for the first few months of the season, blanked the Boston Bruins 2-0 right in Boston Garden.

Young goalkeeper Rogatien Vachon made 31 saves for Montreal to claim his first shutout of the season. Canadiens made goals from Ralph Backstrom in the second period and Jacques Lemaire in the third stand up for the important two points. 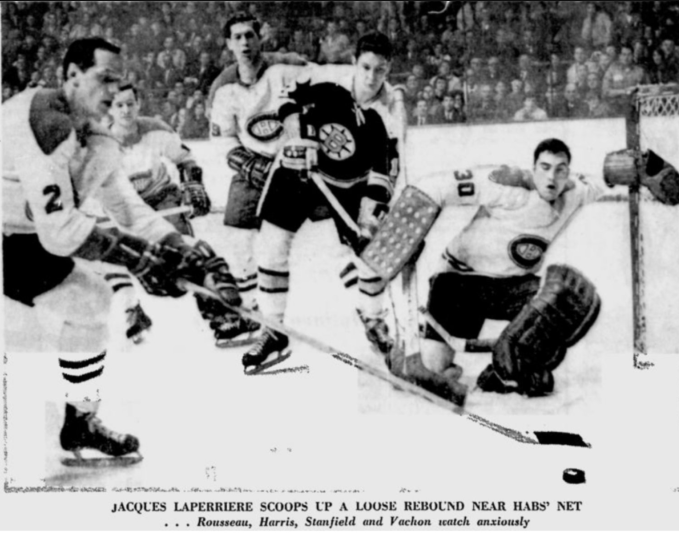 It took a while for the Habs to get rolling, and they had to depend upon Vachon to keep them in the game until they got their legs under them. Coach Toe Blake acknowledged that Vachon was chiefly responsible for the Montreal win:

“The fellows were too tight in an important game and couldn’t get started. Vachon came up with a terrific game and kept us in there.”

Vachon’s two best saves in the crucial first period. He robbed Fred Stanfield after he was perfectly set up by Johnny Bucyk. Stanfield had half an open net but Vachon somehow dove across the goal mouth and denied his shot. He then regained his feet in almost miraculous fashion and made a great save on the rebound try as well.

Vachon, after the game:

“I guess this was the best place to get a shutout. I was sure glad when Jake got that second goal. It took off some of the pressure.”

For the first time in nine games, the Minnesota North Stars won a hockey game playing away from the friendly confines of the Met Centre in Bloomington Minnesota. The Stars invaded The Spectrum in Philadelphia and hung a 3-0 loss on the host Flyers.

It was a fight-filled game, marked by eight major and three misconduct penalties. The Flyers have tried to play it tough all season, but for the most part have found themselves on the short end of all the fisticuffs. This time they lost the game as well.

The North Stars wanted this game badly. They have been in somewhat of a funk since the death of forward Bill Masterton. The two points moved them into second place in the Western Division. 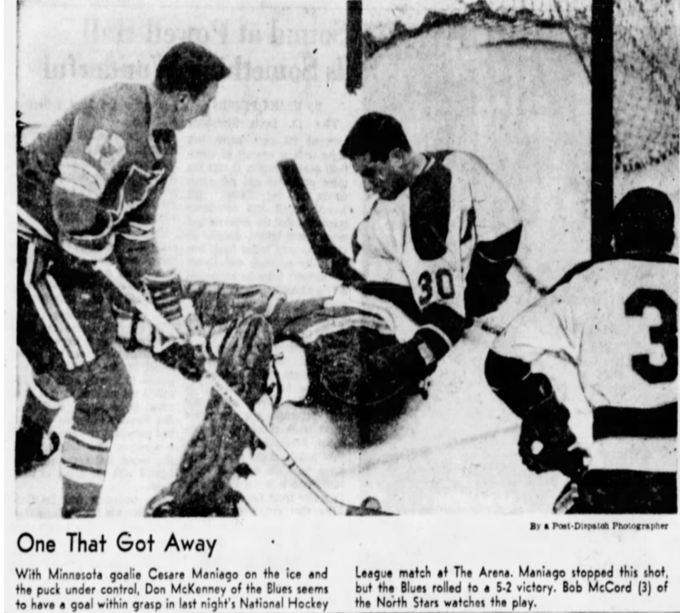 Minnesota goalie Cesare Maniago recorded his league-leading fifth shutout of the season, but had to stop only 19 Philadelphia shots in doing so. The Stars fired 41 at Flyers netminder Bernie Parent, who had another strong outing.

North Stars scored a goal in each period. Dave Balon counted at 10:24 of the first, and that was the only goal Maniago and the North Stars would need. Ray Cullen added a pair of insurance goals over the final 40 minutes.

Balon was also involved in a fight with Parent early in the third period. Parent, after feeling Balon was taking unnecessary liberties in the Flyers goal crease, whacked the North Star left winger across the back with his stick, breaking the twig in the process. That set off a battle royale in front of the Philadelphia net.

When the smoke cleared, Parent and Balon were both tagged with major and minor penalties. Defenceman John Hanna served Parent’s seven minutes.

Flyers Forbes Kennedy was another frequent combatant. He was assessed 34 minutes in penalties for various transgressions, including two fights with the normally peaceful Andre Boudrias.

Detroit Red Wings overcame a 4-1 third-period deficit with 3 goals in the last 8:09 to gain a 4-4 tie with the visiting St. Louis Blues. Paul Henderson’s goal at 18:02 was the game-tying goal.

The game started slowly with little or no offence for most of the first period. Alex Delvecchio netted the only goal of the opening 20 minutes. The Red Wings then played a rather listless and uninspired match until the final 10 minutes of the game.

St. Louis scored three second-period markers as they took control of the game. Red Berenson, Gerry Melnyk and rookie Craig Cameron scored the goals.  Berenson’s goal was his 10th in the past 11 St. Louis games.

Cameron’s goal provided some extra satisfaction for the first-year right winger. He was traded to the Blues by the Red Wings just before the start of the season.

Only 41 seconds into the third period Terry Crisp put the Blues up 4-1 with the sixth goal of his rookie season. That set the stage for the Detroit comeback.

Gordie Howe got things going for the Red Wings at 11:51 with his 22nd on a power play. Doug Roberts narrowed the gap to one just over five minutes later.

Henderson’s tying score came on what was really his only rush of the night. Up until that point he had put on a rather nondescript performance, but he was electric on this play. Using his speed, he sped up the ice, slipped into the Blues zone and beat goalie Seth Martin with a 35-foot screamer to the glove side.

Henderson actually nearly won the game for Detroit less than a minute later when he got another good chance, but Martin got a piece of the shot with his glove and deflected it wide.

Blues coach Scotty Bowman was philosophical in talking about losing a big lead:

“I never count a game until it’s over. It’s tough to lose a three-goal lead like that, but if you had said this afternoon we’d get a tie in the Olympia, I’d have settled for it.”