Three National Hockey League games were played last night with the end result being the Chicago Black Hawks pulling to within one point of first-place Montreal in the Eastern Division, with the North Stars moving two just two points behind Philadelphia in the West.

The Hull brothers did all the damage for the Chicago Black Hawks last night as they downed the New York Rangers 3-2 at Madison Square Garden. The win leaves the Black Hawks just one point behind the division-leading Montreal Canadiens. The Rangers, meanwhile, squandered a chance to move into a fourth-place tie with Toronto for the final playoff spot in the East. 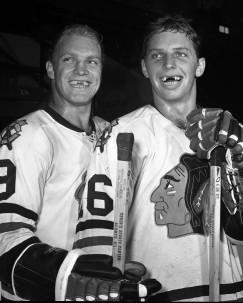 Dennis Hull’s two goals led the Chicago attack. He scored in the first and third periods, giving him 12 for the season. Both of his goals beat Ranger goalie Don Simmons from about 45 feet from the left wing. Brother Bobby struck for his 35th with a wicked 40-foot slap shot on a power play in the middle frame.

Don Marshall with his 10th of the year, and Phil Goyette’s 18th accounted for the New York offense.

Rookie Dave Dryden made 39 saves in a solid performance between the pipes for Chicago. Rangers, starting the veteran Simmons in goal again in place of Eddie Giacomin, made 25 stops.

The most exciting moments of the game came in the latter half of the third period when the Rangers put on a concerted effort to tie the game. Dryden had to contend with a flurry of shots, and came through to protect the lead. He had ample assistance from his goal posts and his defence, who managed to block several Ranger drives as well.

Best player for New York was defenceman Rod Seiling. He was a general on the blue line, organizing rushes, making fine outlet passes, and even getting five shots on goal himself.

The Minnesota North Stars continued their mastery over the Los Angeles Kings last night in Minneapolis. Led by two goals from the red-hot Ray Cullen, the Stars trounced the Kings 6-1. Minnesota now owns a 4-1-1 record against Los Angeles.

Cullen’s two goals give him 21 for the year, tops in the Western Division. Also lighting the lamp for the North Stars were Wayne Connelly, Jean-Paul Parise, Mike McMahon and Bill Goldsworthy.

McMahon’s goal was his 10th of the season, a fine total for a defenceman at any level of hockey, but even more impressive in his first full NHL season. A professional since 1961-62, he had three previous trials with the New York Rangers before finding full-time employment with Minnesota, thanks to NHL expansion.

Terry Sawchuk started in goal for the Kings and played the first 40 minutes surrendering five goals. Sawchuk could hardly be blamed for any of those scores, with three of them coming on clear-cut breakaways. Coach Red Kelly replaced the 38-year-old veteran netminder with Wayne Rutledge for the third period. That moves was likely more out of kindness to Sawchuk, who was left to his own devices for most of the first two periods.

A veteran and a youngster led the St. Louis Blues to a convincing 9-4 thrashing of the Pittsburgh Penguins last night in St. Louis. The same two teams meet again tonight at Pittsburgh in the second half of a home-and-home set.

Thirty-two-year-old Bill McCreary and young Tim Ecclestone, only 20, each fired a pair of goals for the Blues. The other St. Louis scorers were Gerry Melnyk, Red Berenson, Frank St. Marseille, Gary Sabourin and Don McKenney.

Keith, in addition to scoring a goal, engaged in a rousing tussle with Blues tough guy Bob Plager. He held his own against a bigger man with far more pugilistic experience. Older brother Bill said he was proud of his little brother for hanging in against the St. Louis policeman:

“To tell the truth, I’m proud of the kid brother. I thought he held his own, which is doing something against a guy like Bob.”

McCreary also had praise for Ecclestone who has been a pleasant surprise for the Blues.

“Timmy has really come along. He’s responsible for our line jelling the way it has in the last few games. He’s going to be a great National Leaguer.”

Ecclestone hadn’t been even remotely counted on when the Blues picked him up in  a trade with the New York Rangers last summer for a couple of guys named Obendorf and Cardin. He had come up through the Ranger system after being picked by New York in the 1964 amateur draft. He played only one season of Junior A at Kitchener before turning pro this season.

He started this year with Kansas City of the Central Professional Hockey League and was called up after playing 13 games there, scoring four goals and four assists. He won’t be heading back to the minors any time soon.

Les Binkley started in goal for the Penguins but it certainly wasn’t his night. He gave up seven goals on 35 shots over the first two periods and was replaced by Hank Bassen for the final 20 minutes. Bassen didn’t fare much better. He was beaten twice on 10 shots.