A busy Wednesday evening in the National Hockey League with five games on the docket. Two of the games featured the first action for both Toronto and Detroit after their big trade made Sunday evening. Early returns seem to indicate that the Leafs are enjoying immediate dividends from the transaction, while for the Red Wings, not so much…

The packed house at Maple Leafs Gardens provided an eager welcome for the three new Toronto Maple Leafs as they took to the ice for their first game in Toronto last night. As they skated out together as a unit, they received a warm ovation and the love the crowd showed  provided inspiration as the Leafs thoroughly decimated the Philadelphia Flyers 7-2.

Each of the new players, Floyd Smith, Paul Henderson and Norm Ullman, scored a goal in the lopsided victory. Ullman also added a pair of assists in a very successful Toronto debut.

Bob Pulford also had a big night, scoring a pair of goals for the Maple Leafs. Murray Oliver and Mike Walton had the other Toronto goals. Bill Sutherland tallied twice for the Flyers.

The Leafs exacted a measure of revenge against Flyers goalie Doug Favell, who had robbed the Leafs blind in their two previous meetings. They pumped seven goals past the rookie Philadelphia netminder as they outshot the visitors 46-27.

Smith said after the game that the enthusiastic welcome provided by the Gardens faithful was a real boost:

“You wouldn’t believe how the reaction of the crowd took the pressure off us. We weren’t sure how we’d be accepted here. You know – taking the place of a guy like Frank Mahovlich.

Henderson spoke of how nervous and tense he was in the hours leading up to the game:

“Did you guys hear three sets of knees knocking? I don’t know when I’ve been so tight before a game My dinner tasted like paste and I couldn’t relax.

“Whew. I’m glad this one is over. I’ve lost four pounds since the trade. All of us have lost weight. The crowd really made us feel welcome. At least they didn’t boo us out of the place.”

Ullman was also appreciative of the overwhelmingly positive crowd reaction:

“Their cheers was the sweetest music I’ve heard in a long time. It sure eased the pressure. Maybe the nervous energy gave us extra bounce, because I sure felt good.

“We passed up our pre-game steaks for poached eggs to make sure we wouldn’t be logy. Now I’m looking forward to a real feed and a good night’s sleep.”

Despite a perfect chance to gloat, Toronto general manager-coach Punch Imlach stayed in his office during the post-game festivities. But he did speak to Louis Cauz of the Globe and Mail:

“The Detroit line was the best on the ice, no doubt about that.

“And I’ll be starting them Saturday against the Wings. I was going to start them tonight regardless of the cheering. But I must say it really helped them. They were apprehensive before the game and I wasn’t sure what the crowd’s reaction might be.

“They could have had four or five goals. But that Favell was robbing them blind in the that first period.”

Flyers coach Keith Allen didn’t have a lot to say about his club’s dismal performance:

“Ullman never looked that good against us playing for Detroit. That was brutal. Our guys weren’t skating or checking and wandered out of position. We’ll have to be a lot better to give Boston Bruins an argument tonight…”

Flyers will host the Bruins tonight at the Gardens in a game moved here due to the roof damage that has closed their home rink, the Spectrum in Philadelphia.

The other half of The Big Trade didn’t fare quite so well in their first game after the deal. The Detroit Red Wings were blasted 6-1 by the New York Rangers at the new Madison Square Garden. 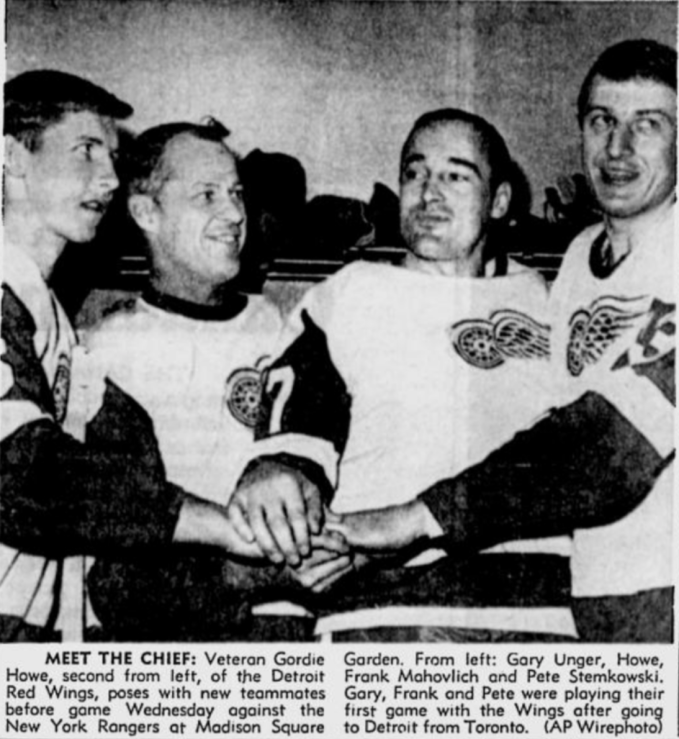 The three new Detroit players, Frank Mahovlich, Peter Stemkowski and Garry Unger, seemed relaxed and eager to get started in their new environs. Mahovlich drew big laughs from his team mates as they arrived at the Garden when he allowed his younger brother Peter to carry his skates into the dressing room.

Things were all downhill for the Big M after that. He was on the ice for three of New York’s goals, and was flattened by a big body check from Jim Neilson. He had only one decent scoring chance, and that clanged off the goal post. He commented on what a huge undertaking it was, suiting up for the first time for a team other than Toronto:

“It sure felt different out there – I mean being in another uniform. Other things, too. Leafs don’t wander as much as this club, so I’ll just have to adjust. But I’m pleased to be here, especially playing with my brother.

“It’s my debut with Detroit and Pete gets the goal. Boy, I guess I’ll never hear the end of that.”

Despite the loss, Red Wings coach Sid Abel was happy with the efforts put forth by his new charges:

“I thought Unger and Stemmer played excellently. As for Frank, well, Gordie (Howe) wasn’t going tonight and when that happens it slows down the whole line.”

Abel also confirmed that he’s going to be conferring with Carl Brewer within the next couple of days to try and hammer out an arrangement whereby the retired defenceman would joing the Red Wings next season. Brewer will be able to return to the pros in December.

Abel was also asked by reporters if the trading of Norm Ullman had anything to do with his role as president of the National Hockey League Players Association. With Red Wings owner Bruce Norris standing nearby, Abel responded:

“Well, that didn’t sit well with me or Mr. Norris.”

As far as the game went, Bob Nevin led the Rangers attack with two goals. Vic Hadfield, Don Marshall, Phil Goyette and Jean Ratelle added singles. As mentioned above, Peter Mahovlich was the only Detroit marksman.

The Red Wings are worried that left winger Gary Jarrett may have suffered a broken wrist during the first period of the game. He was taken to hospital right after the injury and will have x-rays today.

The Boston Bruins spotted the Chicago Black Hawks a 3-0 second-period lead and roared back with four goals in the third period en route to a 5-3 win over the Hawks right in Chicago Stadium.

Stan Mikita and Ken Wharram netted first-period markers, and Wharram added another early in the second to put Chicago up 3-0 by the 1:45 mark of the middle stanza. Ken Hodge’s 20th goal of the season at 7:02 got the Bruins on the board and set the stage for the final frame dramatics.

Glen Sather’s seventh of the season started the Boston comeback at 4:23 of the third, with Johnny McKenzie tying the score at 12:08. Former Hawk Phil Esposito netted his 31st at 16:18, and that proved to be the winning goal. Johnny Bucyk added an insurance marker into an empty net with just nine seconds left on the clock.

Chicago lost centre Pit Martin late in the third period when he was sliced over the right eye for 20 stitches. The injury occurred during a fracas involving Bobby Hull of the Hawks and the Bruins McKenzie. It wasn’t immediately clear whose lumber inflicted the damage.

Boston defenceman Ted Green didn’t play in the third period after being hit on the instep by a Bobby Hull slap shot in the second period. Green will have x-rays tomorrow in Boston. Bruins have called up defenceman John Arbour from Oklahoma City of the Central Professional Hockey League in case Green can’t play tonight against the Philadelphia Flyers.

Bruins outshot the Black Hawks 35-31 on the night. 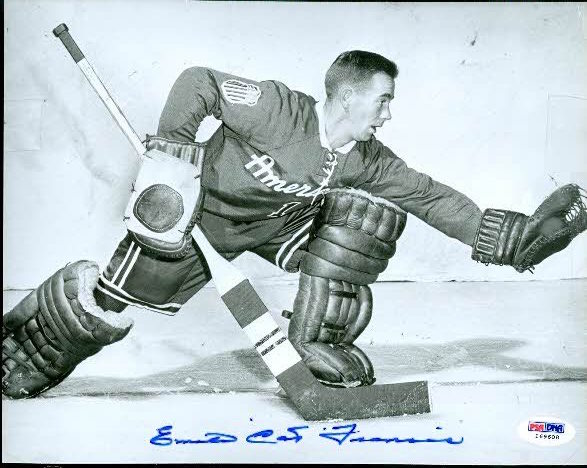 It seems that at the time of his retirement from hockey in 1960, Francis was on the Toronto reserve list. The Leafs never removed Francis from the list, and they have retained his NHL playing rights since that time.

Toronto general manager-coach Punch Imlach needled Francis about the state of affairs from time to time. Shortly after Francis was named general manager of the Rangers, Imlach notified the former netminder that he was expected to report to the Toronto training camp in top shape, and that he would be fined $50 for every day he was late and $50 for every pound he was overweight.

Francis said he welcomed his free agent status, but doubted anyone would come up with a contract that would lure him out of retirement.

While John Ashley has carved out a pretty fair, albeit controversial at times career as a National Hockey League referee, not many know that he played the game professionally as well. But getting traded to a team run by the legendary Eddie Shore was too much for the future game official, and he left the pros.

Ashely was a defenceman who, at 6-1, 185, was completely capable of taking care of himself. Ashely says that he was “quite familiar” with the confines of the penalty box in every league he played in.

The native of Galt, Ontario played junior hockey in Toronto, Stratford and Guelph before attending the Maple Leafs training camp in 1951. Leafs sent him to the Pittsburgh Hornets, Toronto’s American Hockey League farm team, where he played until November of 1952. That’s when the Leafs dealt him to Syracuse of the AHL, a team owned by Shore. After playing 36 games for Shore, Ashley had seen enough. He simply decided that if professional hockey was going to be anything like his experience working for Shore, it simply wasn’t worth it.

Ashley quit Syracuse and suited up for the Ottawa Senators of the Quebec Major Hockey League, a senior loop in La Belle Province. He played 4 games for Ottawa at the end of their schedule.

After taking a year off, he played 4 years of senior hockey in Ontario, taking the time to officiate a few minor and junior games as well. Someone in the NHL offices got wind of Ashley’s work with the amateurs and offered him a job in the big league.

Ashely says he has no idea who initiated his recruitment or why he was offered the NHL job, but he’s happy that things eventually turned out the way they did.