For a guy who said he would definitely retire if drafted by an expansion team or not traded to Detroit Red Wings, it didn’t take Terry Sawchuk long to sign a contract with the Los Angeles Kings. The netminder they call “Ukey” slipped into the Kings training camp at Guelph yesterday, met with general manager Larry Regan and signed a two-year pact calling for a salary of around $40,000 a year.

And then just as quickly, Sawchuk returned to his home in Union Lake, Michigan.

Regan commented that both the Kings and Sawchuk were “pleased with the contract.” He went on to describe the process by which Sawchuk officially became a King:

“We had talked over the phone, but you know how unsatisfactory that is. I wanted Terry signed. So I agreed that if he’d come here, I’d guarantee there would be no interviews. Strictly business and he could go right back. I don’t know why, but that’s how he wanted it.

“I couldn’t afford somebody upsetting him by asking about Glenn Hall’s contract or something. He’ll start practice with us next week.”

Regan would not reveal the exact amount of Sawchuk’s deal, but educated guesses suggest that $40,000 would be about right. Hall signed last week with the St. Louis Blues for at least $45,000.

Coach Red Kelly would not be pinned down to a figure, but did make this comment:

“I don’t know anything about Hall, but per game, Terry could very well be the highest paid player in the game.”

Sawchuk is a sure Hockey Hall of Famer. His career total of 100 shutouts is by far the best of all time. Last year he appeared in 28 regular season games, posting a pair of shutouts and a goals-against average of 2.81, sharing Toronto netminding duties with Johnny Bower. Kelly credits him with being the player most responsible for the Maple Leafs’ Stanley Cup victory last spring.

The California Seals have signed former Montreal Canadiens and New York Rangers star goaltender Jacques Plante. Plante will attend the Seals training camp at Port Huron, Michigan as a special assistant to coach and general manager Bert Olmstead. Plante and Olmstead were team mates with the Montreal Canadiens in the 1950s.

Olmstead told reporters that all arrangements had been completed with the Rangers to allow the retired goalkeeper to work with the Seals. The Rangers still hold Plante’s playing rights, despite the fact that he retired from the club two years ago.

There is speculation that Plante may attempt a playing comeback with the Seals. That rumour is fuelled by word that number one goalie pick Charlie Hodge is threatening to retire if he doesn’t receive a suitable contract offer.

Ravlich Still in a Cast

When the Chicago Black Hawks open training camp on Monday, one player who will be missing is defenceman Matt Ravlich. But Ravlich isn’t a holdout or caught up in a contract dispute. His right leg remains in a cast after a gruesome injury last March.

The 29-year-old blueliner had his right leg broken in two places just above the ankle in a game against the Detroit Red Wings. To make matters worse, the leg popped out of the knee socket.

Ravlich still isn’t sure what happened:

“I lost about 30 pounds while I was in the hospital but now I’m back to my playing weight of 185 pounds and trying to stay their by dieting and a little weight-lifting.”

Ravlich isn’t expect to be ready for on-ice action until December.

Two of the Toronto Maple Leafs four holdouts, Mike Walton and Brian Conacher, made an appearance at the Maple Leafs training camp in Peterborough yesterday. The visit was short-lived, however, and both players left before the end of the day. Conacher did speak with Toronto general manager-coach Punch Imlach before his departure, but the conversation was brief.

Imlach had no comment when questioned about his meeting with Conacher. There are reports that the two men met in Imlach’s room and had a heated discussion. Conacher’s only comment was “If I had known Clancy was not here, we would not have come.”

Both Walton and Conacher refused to register at the Empress Hotel where the Leafs are staying.

Meanwhile, Bob Pulford and Tim Horton continue to refuse to attend workouts. Latest rumour from Red Burnett of the Toronto Star has Imlach working on a deal with the Philadelphia Flyers that would see Pulford depart for the City of Brotherly Love in exchange for a couple of players. 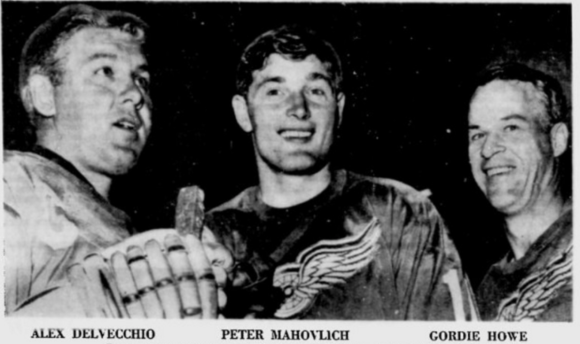