A great weekend in the National Hockey League with 10 games being played. The big news of the weekend was the sweep of the home-and-home series between Chicago and Montreal by the Canadiens. We also saw a very poor performance by the Canadian national team in a nondescript 3-2 win over the United States at the Olympics.

Here are your NHL standings after the weekend: 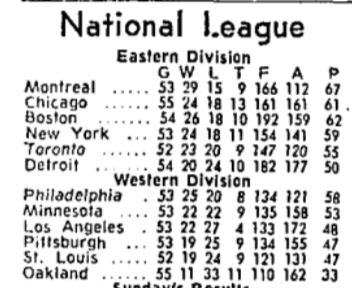 With the Chicago Black Hawks trailing the Montreal Canadiens by just two points going into their weekend home-and-home series with the Habs, one would suppose that the Hawks would be going all out to take over first place in the NHL Eastern Division. The last thing on the minds of the Chicagoans was to lose twice and fall six points back, but that’s exactly what happened.

Monteal, who had languished in last place in the division for the first couple of months, has been nothing less than the NHL’s best over the past two. The Habs have rocketed into first place, leaving everyone else in their dust. Their performance against a club that aspires to be their strongest contender left little doubt about where these teams stand.

Saturday evening in Montreal, the 6-4 score would indicate that Canadiens had their hands full  with the Hawks, but it really wasn’t that close. It’s true that they blew a 4-0 second-period lead, allowing Chicago to tie the score, but when the chips were really down, the Habs simply willed themselves back into the lead for good.

Dick Duff was the hero for the Habs in this one. The 32-year-old left winger scored two goals, giving him 17 on the year. Other Montreal goal-getters were Jacques Lemaire, Jean Beliveau, Ted Harris, Yvan Cournoyer and John Ferguson.Bobby Hull, Pit Martin, Bill Orban and Stan Mikita were the Chicago marksmen.

Canadiens scored two in the first and two early in the second before the Black Hawks scored three quick ones late in the middle frame.

Many teams would have sagged when Mikita tied the game after only 38 seconds of the third, but not this Montreal team. They simply won’t be denied.

Duff, one of the all-time best clutch players in the game, put the Habs back in the lead at 9:29, followed a couple of minutes later by Ferguson’s insurance goal and that was that.

Gump Worsley wasn’t as sharp as he can be, but he made three great saves late in the game to preserve the win for the Habs. Dave Dryden started in goal for Chicago, but he was yanked by coach Billy Reay after Montreal’s fourth score, replaced by Denis DeJordy.

Sunday’s game was a more even performance by Canadiens, as they scored two goals in each period. Coach Toe Blake had a much tighter defence in this one, likely after he had stern words for the team for losing the lead on Saturday.

Rogatien Vachon took over in goal Sunday and was flawless, making 27 saves for his seventh shutout of the season. Reports from the Habs suggested the youngster was in goal because Worsley still had some ill effects lingering from the flight from Montreal. Worsley is a notoriously bad flyer.

Denis DeJordy went all the way in goal for Chicago, facing 34 shots.

Six players shared in the goal scoring for the Habs. Bobby Rousseau and Jacques Lemaire had the first-period markers, Jean Beliveau and Henri Richard connected in the middle frame. Claude Provost and Yvan Cournoyer finished things off in the third.

The goal by Richard was a big one for him. Back in the lineup for the first time after taking some time off to consider his future, the Pocket Rocket converted a J.C. Tremblay pass to send the best possible message to Coach Blake that he’s ready to go.

Chicago coach Reay didn’t have much to say about the Sunday debacle:

“Boy, when you lose like that, you really lose.”

After all, what else could he say? His team was thoroughly dominated by a much faster, more talented team. The nearly 20,000 fans at Chicago Stadium certainly weren’t impressed and showered the home side with a chorus of jeers not often heard in that building.

The Toronto Maple Leafs continued their downward spiral in the NHL’s Eastern Division last night on the west coast. Playing the Oakland Seals, easily the league’s sorriest club, Toronto should have been looking at a sure two points that will be critical in the fight for the final playoff spot.

Instead, the Leafs blew a 2-0 lead and ended up losing to the normally hapless Seals 4-3. After a scoreless first period that was almost devoid of action, the Leafs went up by a pair within a span of 24 seconds in the second. Bob Pulford netted his 15th at 11:24, with Ron Ellis notching his 19th at 11:49. That set the stage for a wild third period.

Seals scored two quick ones to tie it up early in the third. Former Maple Leaf John Brenneman, who has proven to be a useful pickup in the Kent Douglas trade with Detroit, scored his seventh of the year at 1:14 to narrow the lead to 2-1. 31 seconds later, veteran Charlie Burns knotted the score with his sixth.

Just less than three minutes after that, Bill Hicke gave the Seals their first lead of the night with his 15th of the year.

Leafs weren’t quite done, and Mike Walton tied it up once again about 10 minutes later. But with 2:28 left on the clock, Burns struck again.

On a two-man rush with Wally Boyer, Burns took a rink-wide pass and bore in from the left side on Toronto goalie Bruce Gamble. He fired a 25-footer from the faceoff circle that caught the far side of the net on Gamble. Misplaying the angles seems to be a reoccurring problem for the portly netminder in recent contests, and this one hurt.

Gary Smith, the former Toronto prospect, played a solid, entertaining game in goal for Oakland. Smith, never afraid to forsake his goal crease for adventures afar, handled the puck with aplomb on several occasions, but was bailed out by captain Bob Baun on one such foray. He skated with the puck as far as the faceoff dot but was harassed enough by Bob Pulford that he lost the puck. Pulford attempted a shot at the unguarded cage, but Baun had little trouble blocking the weak backhander.

Toronto coach Punch Imlach was asked after the game if he was planning on bringing any more recruits up from Rochester of the American Hockey League:

“I ought to bring the whole Rochester club in here and send this one down there. It’s impossible to send anybody down now, because of all of our injuries.”

Imlach was referring to two new injured players. Ron Ellis has a groin injury and will miss tonight’s game in Los Angeles. Murray Oliver sustained a charley horse in his right leg, but if he can get it worked on, he may be able to play.

It was an evening of pomp and circumstance in New York, and they also managed to fit in a hockey game. The visiting Detroit Red Wings and New York Rangers skated to a 3-3 tie in the final hockey game played at Madison Square Garden. The Rangers put on a nostalgic closing ceremony with a fine array of hockey royalty.

But first, the game.

Jean Ratelle’s second goal of the night just 45 seconds into the third period pulled the Rangers into the tie with the Red Wings. It also extended the Rangers unbeaten streak to 13 games and left them with 59 points, four ahead of fifth-place Toronto in the race for the fourth and final Eastern Division playoff spot.

Ratelle opened the scoring at 1:36 of the opening frame with his 19th of the season. But Detroit would take a 2-1 lead before the end of the first on goals by Alex Delvecchio and Norm Ullman.

Ullman upped the count to 3-1 just before the seven-minute mark of the middle stanza with his second of the game and 27th of the season. Don Marshall scored for New York to reduce the lead to one in the final minute of the second with his 12th. That set the stage for Ratelle’s 20th of the year.

The tying goal came on a rather strange play. Red Wings goalie Roger Crozier wandered 30 feet from his cage in an effort to clear a loose puck. Crozier had difficulty handling it and that enabled Rod Gilbert to gain possession. Gilbert fed a nice pass to Ratelle, who deposited the disc into the unguarded cage.

The main attraction of the night was the closing of the grand old Garden. It is being replaced with a shiny new structure atop Pennsylvania Station.

Gardens management brought in a number of familiar names to give the building a proper sendoff. Many ovations were given to such stars as Maurice Richard, King Clancy and Dit Clapper. And the crowd even got a chuckle thanks to the antics of Detroit’s famed Production Line. The line went slowly down the ice, soft-passing back and forth. Howe fed a pass to Lindsay to finish off the play, but Linsday fumbled the reception and the puck skittered wide of the goal. Abel quickly retrieved the puck, slipped it to Howe who gently fired it into the goal.

The Rangers had their own great line on hand as well. Reunited in vintage Rangers sweaters were Bill and Bun Cook, along with Frank Boucher. They also made a nice rush.

Maurice Richard of Montreal Canadiens fame was on hand, and he proved he can still bring a crowd to its feet, even eight years after quitting the game. Richard made a rink-length solo rush before blasting a slap shot from just inside the blue line, almost through the netting.

Other former Rangers on hand included Ching Johnson, who played in the first game at the Garden, Andy Bathgate, Davey Kerr and Jacques Plante.

Several New York Americans made appearances wearing that famous Americans sweater, still regarded as one of the best uniforms of all time. They included Lorne Carr and Johnny (Black Cat) Gagnon.

Richard was joined by former Habs Aurel Joliat and Dickie Moore. Moore, as he skated onto the ice, heard that familiar “get Moore!” jeer from the Garden fans, before they broke into a very appreciative ovation.

There was even a Montreal Maroons sweater, thanks to the presence of Lorne (Baldy) Northcott.

Game officials were represented by Clarence Campbell, the current NHL president, along with former referees Cooper Smeaton, Bill Chadwick and Frank Udvari. This group, of course, drew the loudest boos.

At the end of the evening, the place was ravaged as fans attempted to take anything not securely nailed down as a souvenir. They chipped away at railings and seats, signs and one idiot was arrested as he tried to dismantle the $50,000 scoreboard.